In Beijing, DAKS, the top fashion brand from England and consistently representing the nobility of fashion, held its autumn and winter new product launches and the opening ceremony of the largest flagship store in mainland China, Beijing Guomao, the reception of Mr. Bruno Massa (DAKS Managing Director) and many celebrities. It is the starry dress that shines in the fashion show field.

DAKS entered China from 1997. After fully understanding the importance of the Chinese market, DAKS opened 11 stores and plans to open 3 more stores in 3 Chinese cities in 2006. This fully demonstrates that DAKS as a hundred-year-old British top fashion brand attaches great importance to Asia, especially the Chinese consumer group, and its firm determination to expand the market. 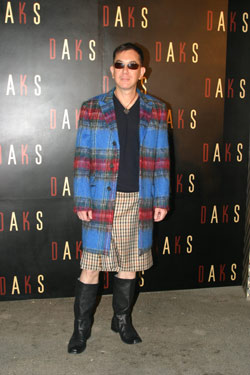 DAKS's new Autumn-Winter 05-06 fashion apparel still continues DAKS's elegant design philosophy. The classic plaid still plays an important role, with the brown line of women's collections, blending into the DAKS's neutral effects of the forties and the mystical feelings of the 70s. The graceful veil on her body reveals the maturity, femininity and ability of a woman. The men's clothing expresses the cold British temperament unreservedly and vividly. The brown line is embedded with bright red, and the Scottish style elements are added to it. The loose mid-length jacket still considers the degree of fitness and reveals the brisk city. feel. Particularly worth mentioning is that DAKS autumn and winter series of accessories are also eye-catching, the classic checkered fabric, with a warm winter atmosphere appeared in front of everyone; rich atmosphere of the pattern handbags in the retro show uncontrollable Fashion taste; stripes or checkered scarves will also be eye-catching glamorous embellishment in the glamorous city. 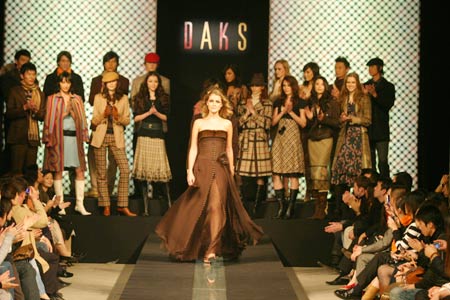 The classic style of the DAKS brand has already appeared in the shop of Beijing International Trade Co., Ltd., the largest flagship store in Mainland China, which was just opened in July this year. This DAKS store located in China World Mall features 190 square meters of spaciousness and detail design, covering the rigorous and atmospheric charisma from Britain. The whole main color of the hall is of course derived from the tan on the DAKS logo, and the most classic and unique House Check pattern is also exactly blended into the entire space. In the most prominent position of the shop window and storefront, DAKS seasonal image design as the theme of the layout, points out the brand has inherited the aristocratic temperament - gorgeous delicate, low-key luxury.

The overall layout of the store and the shopping atmosphere have made the most comprehensive considerations for consumers' comfort and comfort. An elegant leather sofa with cushions on the House Check pattern and magazines that can be read on the coffee table... In all the DAKS stores in the country, the International Trade Center maintains the authentic European feeling, regardless of the overall environment or the displayed goods. We can feel the pureness from England's native place.

Just as DAKS's brand charm has been maintained in the style design, the glory of 100 years since its creation combines the quality, craftsmanship, tradition and innovation of DAKS with the British aristocratic atmosphere in every detail. The combination of retro and modernity reverts peopleâ€™s attention back to the nature of inner feelings. In China, it is a true enduring fashion and classic for more followers. 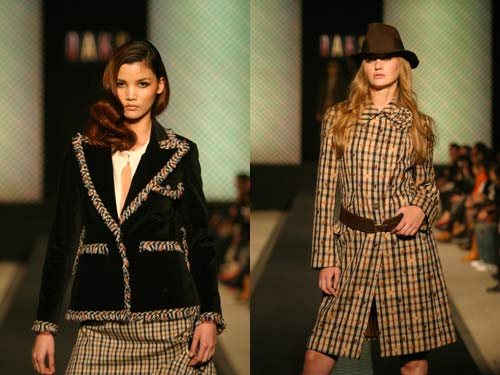 The Plaid pattern originating from England not only bears the burden of depicting British history, but also plays the role of the British fashion symbol. The Scottish Plaid Registration Association has registered hundreds of different Plaid patterns. Some of them are named after family names and represent different Scottish families. They continue to inherit the essence of British culture.

DAKS's unique House Check traditional plaid pattern was designed in 1978 by Johnny Mengers, one of the leaders of the Simpson Group. It is made of black and a small amount of white, a combination of camel hair and camel cashmere, two extremely luxurious and expensive fabrics. Small and exquisite, revealing a noble aristocratic temperament. This classic plaid pattern was not only immediately adopted to Simpson Picadilly's exclusive shopping bag, the shop even re-appeared for the birth of this pattern, in the original wooden floor is also laid in the same three colors weaving soft rug. At the same time, this style of Plaid was constantly exposed in the ever-increasing color supplement of newspapers at that time, and it clearly announced the return of the retro classic British trend. 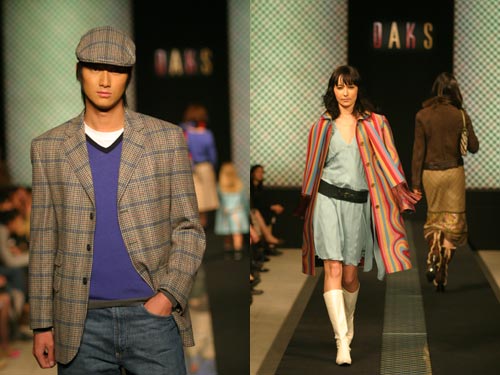 Johnny Mengers did the opposite and decided to interpret the DAKS classics with dramatic "black and white" photography. They found one of Vogue's greatest black-and-white photographers - Horst P Horst, who had been over 80 but still insisted on working on photography in Long Island, New York, produced a series of black and white shades with strong shadows. The copy of "One look tells you it's the DAKS original the 1930's" (pure, making DAKS from the classics of the 1930s). Afterwards, the pattern of DAKS continues to evolve, incorporating more colorful elements such as blue DAKS Blue Loden, DAKS Muted blue, green DAKS Muted Loden, DAKS Navy, DAKS Tartan-Loden, etc. And so on, step by step in the visual effects, and interact closely with the pulse of fashion.

DAKS is highly favored by the British royal family, not only because of its design style and consistent aristocratic taste, but also because DAKS does hold the popular pulse. Its style design has long focused on comfort and nature, making people feel at ease. Wearing fun. When DAKS came to China, for the Chinese Plaid fanatics, they finally had a chance to kiss the classic House Check. The obstinate obsession with traditional Plaid not only expresses its dedication to the British traditional culture, but also means that the British fashion trend is constantly changing between retro and innovation.