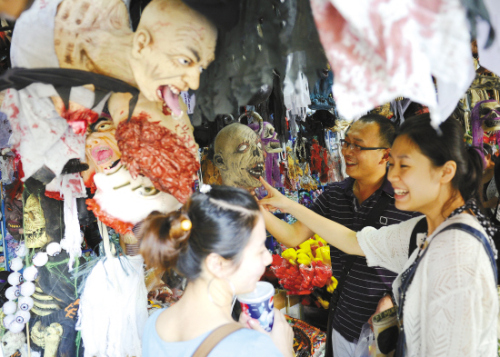 October 31 was Halloween. Shenzhen Sungang Stationery Toys and Gifts Wholesale Market and many shopping malls had already started the business of â€œghostingâ€. It attracted the attention of many Shenzhen citizens. Various kinds of â€œghostingâ€ and â€œghostingâ€ in the Sungang Wholesale Market. "Funny" goods are also selling hot. According to reports, funny masks, colorful wigs, mysterious cloak and other goods have been very popular recently. Most shoppers are staff at bars, restaurants and shopping malls. The reporter visited the Shenzhen shopping mall and found that this year's mall's Halloween promotion is still based on discounts, gifts, and prizes. According to people in the industry, after the recent market cultivation, Halloween has gathered a certain popularity in Shenzhen. Although it is less than the â€œbig festivalâ€ such as Valentine's Day and Christmas, it can still stimulate consumption.

The delight of the Mid-Autumn Festival celebrations in the mall's "Ghost" promotion has not yet faded. The atmosphere of the Halloween carnival is blowing again. The reporter learned that all the Rainbows in South China introduced a variety of exotic, tricky, and personal Halloween items, which began selling on October 15. Each Rainbow also curated a series of Halloween orgy interactive games, including Halloween graffiti, carving, and big talk. Wang Da Competition, 3D movie scene shock experience, etc.; In addition, Rainbow also set up a lively character Halloween scene, October 29, 30 Rainbow Elves from time to time out of the nest, there are all kinds of gift delivery.

A reporter from Jisco Island in CITIC City Plaza saw that some people who walked around were wearing a pale mask, a black magic robe, and a magician hat. There are pumpkin lanterns, dragonfly gloves and Superman and angel costumes around the counter. According to the staff, each year, Jeju Island's Halloween jewelry counters are very popular and most of them are children and young people.

Coast City Mall has played a theme of â€œHalloween Carnivalâ€ in the recent â€œStory City Story Collectionâ€ promotion theme. It has built a landscape of â€œHalloween Manorâ€ landscape on the second floor and has many beautiful man-made scenery. Attract many customers to stop and watch. According to reports, the Coast City Shopping Center held a LEGO and HAPPY FRIENDS show in the first floor of the atrium from October 27th to November 1st. The colorful costumes were accompanied by funny and funny masks. Come out, adults and children indulge in fun and experience the warmth of the love of the pumpkin lantern.

During the interview, the reporter found that although there are still half a month away from the Halloween night of the West, the merchants here have already opened the â€œwonderful surprise tour for the citizensâ€. According to the shop owner, compared to previous years, this year's Halloween props are not only diverse, but also more intelligent. Whether black spiders or gimmicks, they can use sound to control their activities. The reporter tried to pat the palm of his hand and saw that the black spider began crawling slowly on the spider's web. The hanged ghost made a creepy "click" and the white fangs next to him giggled while turning red eyes. And even the jack-o-lanterns can be â€œsqueakedâ€ as the power switch is turned on, as if they were placed in a terror zone all of a sudden. The boss also explained that even the most common pumpkin lamps this year are more sophisticated than in previous years. "The so-called 'squash lamp' was just a closed pumpkin, and the upper part of the pumpkin lamp is now open, you can put candles in it and hang it up. A true lamp."

The reporter learned that pumpkin lanterns, wizard kits, ghost masks, magic cloaks, horror braces, and various fashion cartoons are mostly between a few yuan and thirty yuan; voice-activated witches, ghosts, skulls priced at 110-180. Yuan; The most expensive is the half people on the ground, the price is 450 yuan. The origins of these funny toy ornaments are mostly from Zhejiang Yiwu, Jinhua and other places. The reporter saw on the scene that several young people were picking props. They looked at it and consulted it. They also used a digital camera to shoot down the fancy props. Finally they bought two pumpkin lanterns, three luminous stars, and a voice-activated witch. . The store owner told reporters that he had sold Halloween supplies for several years and that the turnover of these props could be as high as 100,000 yuan per year.