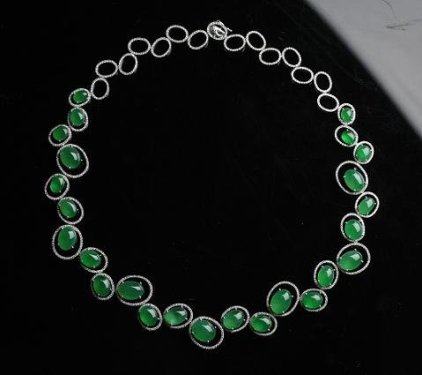 1, "positive" refers to the green to be pure, it is the "evil" color corresponding. The so-called pure green primary wavelength should be relatively concentrated in the green wavelength range, generally considered this range is 530 ~ 510mm. If the color wavelength is shorter than the short wave direction, Jade will be blue (such as in the 495 ~ 480mm, this is the so-called color cast or with "evil" color); if the main wavelength of the color of jade is long-waveband will be yellow (such as Reach 540-545mm). When the main wavelength range is wide, the color of jade seen is a mixture of multiple colors, and its color effect will not be very pure.

2. "Yang" refers to the vividness of green, which is opposite to "yin". The "Yang" and "Yin" of jade color mainly refer to the brightness of its color. When the brightness is large, the green color will be bright and it will give people a bright and pleasant feeling. On the contrary, when the color of jade is dark and â€œyinâ€, the beauty of jade will be greatly reduced.

3. â€œDenseâ€ refers to the shade of green, green and blue, ie, the saturation of green. More strictly speaking, it refers to the percentage of the green main wavelength light in the entire light wave composition. When the whole light wave is dominated by the green wavelength, When the light is composed, its saturation is 100% (it is actually rare), and its green color will be very deep. On the contrary, when the relative percentage of green light waves in the whole light wave is very low, its saturation is close to zero, and the color is near. In colorless.

4, "uniform" also known as "and", refers to the emerald green distribution is uniform, full, the most high-grade emerald green is full of the whole jade is evenly divided, the so-called "full color." Therefore, the "uniform" color index should include two aspects, one is the number of green, and the other is the distribution of green.

There are many kinds of green jade, can be divided into green, green, green, green beans, green. And emerald green, which is the best emerald green. A piece of jadeite is usually seldom all green. Except for part of jade, the part of other colors is called "land", and the color of "land" is "white, gray, yellow, black, green, purple, green lake water" and other colors. The more green jade is, the better. High-quality jadeite should have four conditions of â€œcuihaoâ€, â€œgood waterâ€, â€œgood groundâ€ and â€œperfect degree of perfectionâ€.